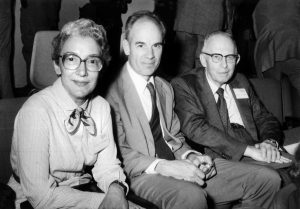 Elaine Diacumakos (1930-1984) was an American cell biologist and head of the cytobiology laboratory at The Rockefeller University who developed the first techniques for removing and inserting material into and from cells.

Born in Chester, Pennsylvania, on August 11, 1930, Elaine Diacumakos earned a B.S. degree at the University of Maryland and M.S. and Ph.D. degrees in cell physiology at New York University. She first came to Rockefeller as a postdoctoral fellow between 1962 and 1964. After working at Sloan-Kettering Institute and Cornell Medical College, she returned to the University in 1971 at the invitation of Nobel laureate Edward Tatum, an association that continued until Dr. Tatum’s death in 1975.

Dr. Diacumakos refined techniques involving the use of glass microneedles and micropipettes, maneuvered with mechanical positioners as she looked at cells under very high microscope magnification. In addition to adding material to cells and transplanting nuclei from one cell to another, she was able to inject the material, such as viruses, into cell nuclei and other minuscule cell parts. She also developed means for fusing two cells of the same or different types, forming a bridge between them with a microneedle.

Dr. Diacumakos was frequently asked to teach her techniques at other institutions, including the Pasteur Institute in Paris in 1981. She also served as an Expert Consultant to the Molecular Hematology Branch of the National Heart, Lung, and Blood Institute.

On the Rockefeller campus, Dr. Diacumakos was admired for her concern for this community. She served as a president of the tenants’ association of Faculty House and on the boards of the Rockefeller University Children’s School and the Faculty and Students’ Club.