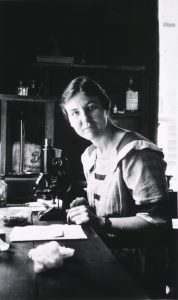 Evelyn Butler Tilden poses with a microscope at the National Institutes of Health, 1940

Tilden was born on March 28, 1891, in Lawrence, Massachusetts to Harriette (née Butler) and Howard Benjamin Tilden. She completed an A.B. at Brown University in 1913 and three years later, in 1916, took a position at the Rockefeller Institute for Medical Research. While working with Hideyo Noguchi, a renowned tropical disease specialist, as his editor, she quickly became a laboratory technician and developed a technique for the routine diagnosis of syphilis in 1922. With Noguchi, Tilden worked on trachoma, finding that Bacterium granulosis was still a potent infector after a year or more of dormancy. When Noguchi died in 1928, she helped finish his work showing that Oroya fever and verruga peruviana are the same diseases.

During her time at the Rockefeller Institute, she earned an M.S. (1926) and Ph.D. (1929) at Columbia University. Her dissertation, co-authored with Edgar G. Miller Jr., was titled The Response of the Monkey (Macacus rhesus) to Withdrawal of Vitamin A from the Diet.

After one year of teaching at Colorado State University, Tilden joined the NIH Division of Chemistry in 1937 where she discovered how to prepare rare sugars from avocados. In 1942, she left to become a professor at the Northwestern University Dental School, where she was funded by NIH for work on bacteria in saliva. In 1948, she published a textbook Outline of Bacteriology.

In 1954, Dr. Tilden began working at the Brookfield Zoo as a microbiologist and eventually cured a fungal disease in penguins kept in captivity. She remained there as an emeritus after her retirement.