100 years ago, on January 16th, 1923, Ezechiel Godert David “Eddie” Cohen, the Professor Emeritus at The Rockefeller University and leader in statistical physics and nonequilibriu statistical mechanics, was born in Amsterdam, the Netherlands, into a Jewish family. His father, David Ezechiel Cohen, studied medicine in Amsterdam and after receiving his Ph.D. in 1913, specialized in dermatology. In 1921 he married the history teacher Sophia Louisa de Sterke. They had two children: Ezechiel Godert David “Eddie” and his brother, Carel Lodewijk David Cohen (now de Sterke), born in 1924. In 1942, during the German occupation of the Netherlands, the family was forced to go into hiding and was separated; Eddie and his brother escaped the fate of their parents, who were betrayed and perished in Auschwitz in 1943. 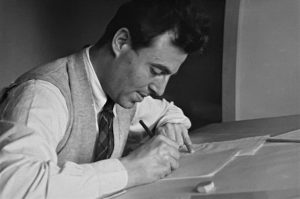 Dr. E.G.D. Cohen first became well known in the scientific community for devising a kinetic theory to describe the properties of dense gases and liquids. In 1961, he predicted the theoretical possibility of an incomplete phase separation in liquid mixtures of the two helium isotopes (H3, H4) at very low temperatures. His prediction was later verified experimentally, and this work led to the design of the helium dilution refrigerator, which is used in laboratories to cool materials to temperatures near absolute zero.

Working with numerous students, postdocs, and visiting scientists, Dr. E.G.D. Cohen made many important contributions to nonequilibrium statistical physics. Among them was a deep study of the long-and-short wavelength behavior of microscopic hydrodynamic modes in dense hard-sphere fluids.

In 2004, Dr. E.G.D. Cohen won the Boltzmann Medal from the Committee on Thermodynamics and Statistical Mechanics of the International Union of Pure and Applied Physics. The medal, awarded every three years, is the highest award in the field of statistical mechanics. That same year, he received a Royal Knighthood in the Order of the Dutch Lion, an honor that acknowledges individuals in arts, science, sport, and literature. He was a fellow of the American Physical Society, a member of the Johns Hopkins Society of Scholars, and a member of the Royal Netherlands Academy of Arts and Sciences. 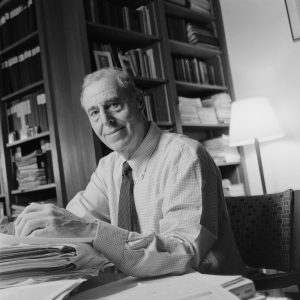 His former colleagues and collaborators remember Dr. E.G.D. Cohen as a passionate educator and a mentor. He spent time as a visiting professor at several universities over the years, including the University of Florida, the University of Delaware, the Australian National University, and a handful of institutions in Europe.

Dr. E.G.D. Cohen retired from Rockefeller in 1993 but remained scientifically active. He moved to Iowa City, Iowa, in 2015 to be near his family even as he continued to collaborate and publish through 2016. His last paper was published in August of 2017 in Physical Review.

In celebration of Dr. E.G.D. Cohen centennial birthday, the Markus Library presents a display in Welch Hall dedicated to his life and career and it also invites you to watch an interview with Dr. E.G.D. Cohen that was recorded in 2004.