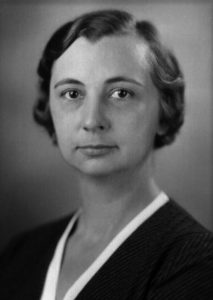 Clara Ida Nigg (1897-1986) was an American bacteriologist who developed methods of cultivating Rickettsia prowazekii and proved that this organism only reproduces in living cells.

Clara Nigg was born in 1897 in Waco, Nebraska, and studied at the University of Kansas, receiving her MA in 1921 and a Ph.D. in 1929 for her thesis “Studies on Isohemagglutination”. After working as a bacteriologist in a public health laboratory and at St. Bartholomew Hospital in New York, she obtained a position at the Health Department of Minnesota (1922). From 1923 to 1926 and again from 1927 to 1929 she was an instructor in bacteriology at the University of Kansas. From 1926 to 1927 she did research at the Queen’s Hospital in Honolulu, Hawaii.

In 1929, Clara Nigg joined the Rockefeller Institute to work with Karl Landsteiner on typhus. By the early 1930s scientists knew that lice transmitted the disease and the organism that causes the disease, the bacterium Rickettsia prowazekii, had been identified. But in order to develop a vaccine, researchers needed to overcome the obstacle of growing Rickettsia in culture. Clara Nigg both developed methods for cultivating Rickettsia prowazekii and proved that the organism—like viruses—reproduces only in living cells. With Landsteiner, Nigg built on tissue culture techniques that had been worked out by Thomas Rivers for growing viruses. One of her colleagues wrote that Clara Nigg’s unselfish, devoted work deserves the highest praise. During the course of this work, she contracted typhus fever and was ill for many months (and in fact became a patient at the Rockefeller Hospital).

After leaving the Rockefeller Institute in 1937, Clara Nigg joined the Squibb Institute for Medical Research in New Brunswick, New Jersey, where she headed the department of bacteriology and virology through the 1940s. She also served as a consultant to the U.S. Office of Scientific Research and Development. In 1952 she became director of the bacteriological department of the Naval Biological Labor, School of Public Health, University of California, Berkeley. She later concentrated her research on the infectious disease melioidosis, with which the American armed forces in Southeast Asia were confronted and whose pathogen could be used as a biological warfare agent.

There exists a tape record of an interview by Sally Smith Hughes with Clara Nigg from 1982 at the Bancroft Library, University of California. The 85-year-old Clara Nigg vividly remembers her work, done half a century earlier, with Landsteiner, and the fact that she was allowed to be the first author of their joint paper Growth of Rickettsia of typhus fever (Mexican type) in the presence of living tissue. “That’s most unusual. Most unusual,” she said in the interview.