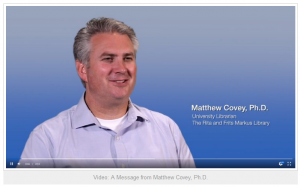 This August, Matthew Covey joined Rockefeller as the new University Librarian. The first scientist to hold the position since Professor Alfred Mirsky’s tenure as librarian from 1965 until 1972, Matt’s appointment emphasizes Rockefeller’s commitment to revitalizing the Rita and Frits Markus Library with new services, resources, and expertise that more directly support biomedical research in a digital world.

“We’re striving to provide as much content digitally as we can,” says Matt, including, new databases, data management tools, and other electronic resources. “That’s the forward progression that is taking place. Libraries just aren’t about books, journals and stacks anymore; they’re about the digital space. [Markus Library is also] a collection of people that can really help [scientists] fulfill their goals and make their science all the better. Our goal is to be more outwardly facing and to work with people more…in their labs, at their desks, at their benches, in their lab meetings, and just be more involved in the community. I’m looking forward to meeting the faculty and staff in order to learn how the Library can best serve the community as I shape my plan.”

Matt comes to the Library via a non-traditional route (read his full bio here). He received his BSc (Hons) in Neuroscience at the University of Otago and his PhD in Anatomy and Structural Biology from the University of Otago in Dunedin, New Zealand. There he studied the effects of various treatment modalities on the severity of brain damage after a hypoxic-ischemic event in pre-term and term infants. He then went on to do postdoctoral work examining the response of sub-ventricular zone stem cells to a hypoxic-ischemic event and the regulation of neuronal development. It was during his second postdoc that he became more interested in the issues surrounding data management, data sharing and re-use, as well as scholarly publishing and Open Science. He then began to pursue opportunities where those issues could be addressed.

Matt is excited to build upon the proud history of the Library and enthusiastic about the opportunity to work with his new colleagues. Please feel free to reach out to Matt directly to set up a time to talk!

Libraries just aren’t about books and journals and stacks anymore. They’re about the digital space. They’re about e-resources and e-books and databases and complex systems that people are accessing. So that’s why libraries are often now falling under the realm of IT. We work in a digital World. We exist in a digital space. People don’t realize that we have a fantastic staff that are well skilled in doing a lot of different things and have a lot of experience in developing complex searches and utilizing resources that a lot of people don’t use. Our goal is to be more outwardly facing and to work with people more, to get with people in their labs, to work at their desks, at their benches, in their lab meetings, and just be more involved in the community.

I think the misconception is the library’s very insular and is sort of very inward, and so we want to change that. We want to be out there. We want to be coming to people and we want to be helping them where they need their assistance. Obviously, we still want people to come to the library, use our spaces, use the great resources that we have there, the study spaces, the quiet. It’s a fantastic place if you want to write a grant or get away from your desk and just be able to read in peace. But we want people to know that the library is more than just a physical space. It’s a collection of people that can really help them fulfill their goals and make their science all the better.

We’re also going to launch our new blog.  It’ll be a great spot for people to find out about events in the library, trainings, new resources, new journals, the new subscriptions. Here at the Marcus Library, we’re striving to provide as much content digitally as we can because that’s the forward progression that is taking place. Things are moving into the digital space. That’s why libraries exist primarily now in that digital realm and as part of infrastructure like IT because the services we provide and the things we utilize are all in that information technology realm.

About the Author: Douglas Many

Douglas Many is the Manager of Library Systems and Electronic Resources of the Rita & Frits Markus Library at The Rockefeller University. email: many@rockefeller.edu