As the Rockefeller University Press and the whole Rockefeller community celebrate the 125th anniversary of Journal of Experimental Medicine, the Markus Library is pleased to present a new exhibit JEM: The Beginnings that highlights the lives and careers of two first editors of the journal: William H. Welch and Simon Flexner. The exhibit contains early artifacts and photos of the founders, as well as their correspondence and musings. It is on view in Welch Hall and is also presented online in the Digital Commons.

Back in 1896, The Journal of Experimental Medicine was founded by Dr. William Welch, a pioneer in medical education and first President of the Rockefeller Institute’s Board of Scientific Directors. This was before the Institute itself was founded – a time when scientific journals, particularly in life science and medicine, were almost non-existent in this country.

Dr. Welch, with the encouragement and cooperation of President Gilman of The Johns Hopkins University, had established The Johns Hopkins Medical School, and almost at once the need for a means of publishing original contributions to the medical sciences arose, and Welch himself launched The Journal of Experimental Medicine with financial support provided by The Johns Hopkins University. In his introduction to the first issue Dr. Welch, its sole editor, wrote: “In consequence of the absence of such a journal as is here contemplated there has been a lack of the close contact and free interchange of ideas both between our own workers and between American and foreign investigators, which are fruitful in stimulating scientific research and in securing both here and abroad due consideration of work done in this country.” 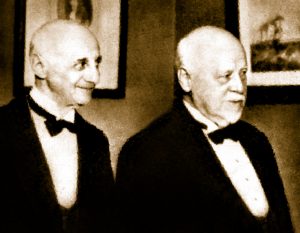 Dr. Simon Flexner, who succeeded Welch in 1902 as editor of JEM, told in his admirable biography, William Henry Welch and the Heroic Age of American Medicine, that the new venture “was itself a radical experiment; it was generally believed that America did not produce enough scientific work to fill its pages.” Later, however, Dr. Flexner continued, “the Journal succeeded beyond all expectations since American laboratories proved able to produce far more articles worthy of its pages than anyone has foreseen.”

The first issue of JEM published by The Rockefeller Institute appeared in February 1905, with Flexner serving as editor, and the journal has been published regularly since then.

Browse the exhibit JEM: The Beginnings